Fanny: Being the True History of the Adventures of Fanny Hackabout-Jones

What if Tom Jones had been a woman? What if Fanny Hill had been as witty as she was sensuous? What if Moll Flanders had been as tenderhearted as she was tough? You would have a hint (but only a hint) of Fanny Hackabout-Jones. In Fanny: being the True History of the Adventures of Fanny Hackabout-Jones, Erica Jong combines the historical reality of 18th century England with a woman whose consciousness and aspirations are thoroughly contemporary.

Told as a diary to her daughter, Fanny begins her story when she is discovered upon the doorstep of a great house in Wiltshire, where she grows to luscious young womanhood under the care of Lord and Lady Bellars. Circumstances force her to run away to London to "seek her fortune", and on the way, she falls in with witches, highwaymen, a Madam, Famous Notables of the Day (such as Swift and Hogarth), pirates and other assorted characters. Fanny experiences a series of hilarious adventures which not only test her mettle as a woman (and force her to grow up) but reveal the world of 18th century England, Africa and the Caribbean with detailed accuracy. Fanny, written in the language of the 18th century, is a parable of a woman's life in a time when women suffered much greater oppressions than they do today. It is also a novel about mothers and daughters, a social history of 18th century life and mores.

"...Mrs. Fanny, who useth her reason as well as her rump, is a most refreshing delight."
—Washington Post Book World

"A galloping good story... rollicking and bawdy, with a center of pure gold. Read it!"
—Cleveland Plain Dealer 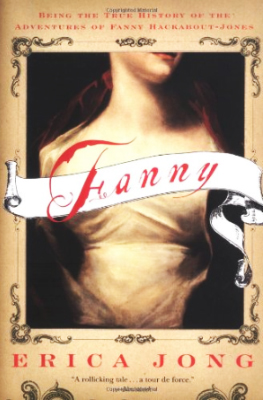